A long time ago (1709 to be exact) in a town not far from the Peruvian colonial city of Arequipa, there rested a wonderfully carved statue of the Madonna so compelling that people from the city often made pilgrimages to sit in the Chapel and contemplate her beauty. 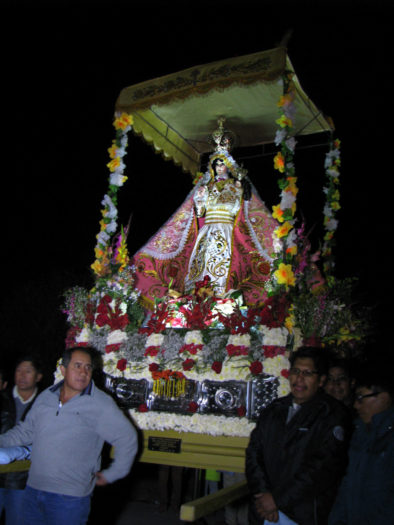 The donkeys hit their harnesses but the wagon would not move. More than a dozen men set their backs to the wagon, but still, it did not budge. Bent over from their effort and completely perplexed, the men in charge of the caravan suddenly heard a voice that seemed to emanate from the statue. It was crying, “Chaypi! Chaypi!” Others heard, “Chajachay! Chajachay!” And still others heard, “Chaj! Llallapi!”

Startled, the committee quickly decided that the Virgin Mary wanted to remain at her home in the humble chapel far from town. And so she stayed and became known as the Virgin of Chapi, which is Quechua for “here.”

Fast forward to 2006, ten years after Quechua Benefit’s inaugural mission in Peru. The Board of Directors decided to expand the charity’s mission beyond the role of providing medical and dental assistance, disaster relief, and financial support for various orphanages.

We began looking for land to build a school, children’s home and chapel.

An opportunity presented itself to purchase a lovely property at the site of Chapi, the local chapel built 100 years ago to honor the Virgin Mary. The deal failed when the owner’s relatives argued about the sale.

After a long search for the right property, Juan and Oriola, an old Quechua couple who owned the local motorcycle shop in Chivay, offered to sell us 80,000 square feet of land lying next to the Chapi Chapel. It was perfect, and we all agreed that this was the place to build the children’s home we had dreamed of. The directors of Quechua Benefit decided to name the new children’s home they building “Casa Chapi,” which means “home is here.”

In 2010, we began building the cottages, dining room and clinic that now make up the children’s home.

In 2016, the Maranatha Chapel, with resplendent stained glass windows depicting the Virgin of Chapi, was completed and dedicated.

Today, kids from Casa Chapi stream up the stairs for Sunday school and church. In the future, we hope the chapel will draw people from around the world to Casa Chapi. It seems the mother of Jesus wanted the children gathered close to her. She said “right here.”

Share this:
How Vicuña Survived Mankind
A peek behind the curtain: Quechua Benefit’s team in action, part one